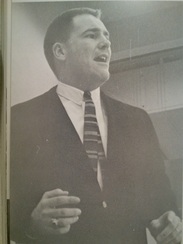 Coach Dick Corbin started the Ashland Wrestling program in 1967.  In the first year of the program's history, the Clockers went undefeated in dual meet competition and were crowned Dual County League Champions.  They were led by captain Al Czajka and fellow senior Lou Mancini.  Mancini became the first wrestler in all of metrowest to win a state title.

Success continued.  The 1968 team the best tournament team in the history of the program, and quite possibly the best team period.  This squad was anchored by co-captains Bob Rice and Joe Lefter and state champ Larry Picciolli.  The '68 matmen finished 3rd in the entire state and fourth in New England.

The 1969 season produced Ashland's first New England Champ in Arion (Gus) Mancuso.  Mancuso is believed to be the only wrestler in Massachusetts history to win a New England Title as an alternate entry into the tournament.  Other wrestlers enjoying success on the 1969 squad included future Boston State wrestler Al Kinerson and junior Bobby Cann. 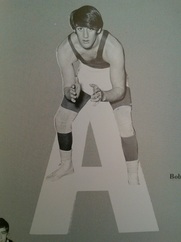 In 1970 Coach Lou Varrichioni took over the reigns as head coach.  Coach Corbin moved on to Milford High School where he took over as Athletic Director, started Milford's wrestling program, and continued to serve as the head football coach for the Scarlet Hawks.  He is thought of as one of the most influential people in the history of Milford athletics.

In 1970, Bobby Cann became Ashland's 3rd state champion in the first four years of the program.  The squads only dual meet losses came to Wayland and Newton South.  The '70 Clockers were led by captains Bobby Cann and Eric Rice, and fellow matmen, Billy O'Connor and Dave Reynolds.

Coach Varrichioni had some solid teams throughout the 1970s.  The '73 squad featured future coach of the '80s Paul Capobianco.  In 1976, long-time assistant coach Mark MacKay was in his prime.  The '78 squad was anchored by sectional champs Bob McCarrick (tournament O.W.), Dave Steeves, Frank Weitz, and sectional finalist Mike Flaherty.  The '78 team went 8-2 in dual meet competition. 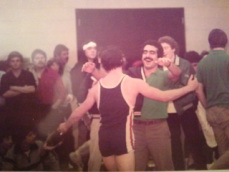 1967 State Champ Lou Mancini took over the reigns as head coach in 1979.  In 1980, the Clockers had arguably one of their best dual meet teams in the history of the program.  They recorded a smashing 51-9 victory over rival Newton South.  They also went on to beat prominent New England contenders in Nashua, NH and Keene, NH.  They finished the season with a 13-3 dual meet record.  The 1980 squad was led by Joe Nicklow (100 lbs.), Dave Steeves (124 lbs.), and Martin Fewerda (114 lbs.).  The lower weights were never more consistent in the history of the program.

Coach Paul Capobianco then followed in his predecessors footsteps by becoming the second coach in the program's storied history to head the club after previously wrestling for the Clockers.  The 1981 team, led by Jimmy Greene, Ed Muri, and Scott Rohmer did not disappoint.  As a dual meet team, they followed in the footsteps of the 1980 squad.  Defeating rival Wayland was one of the many team accomplishments of 1981.  The successful years of the mid '80s were underway.  In 1983, Marc Mespelli became Ashland's first state champion in over a decade.  He was followed in 1984 by Bob Capistran.  In 1985, Dan Paul won a state title extending the streak to a program record three straight years of individual state champs.  Paul captured a New England crown as well.  Paul is the most decorated Ashland wrestler of all-time.  Terry Camara, Tom McCarrick, and Rich Flaherty also enjoyed success on the mat for the Clockers.  Terry Camara has since continued his impact on Ashland Wrestling, revitalizing the youth program in 2014. 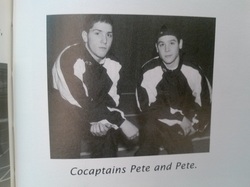 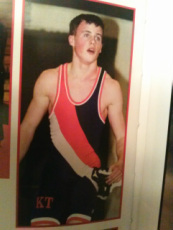 
Paul Capobianco's second stint as head coach would be from 2002-2003.  The last team in Ashland pre-co-op years was the 2003 squad.  This team featured current Ashland football coach Andrew MacKay.

In 2004, the Ashland-Keefe Tech co-op began.  1997 State Champ Peter LaPointe took over the reigns and shortly thereafter current co-head coach Don Marini and assistant coach Mark MacKay (class of '76) joined the staff.  The co-op years have been highlighted by names like Diego Silva and Mike Capobianco.  Diego Silva was a 2005 State Champ at heavyweight.  Mike Capobianco is the all-time leader in wins for the Ashland-Keefe co-op with a career record of 109-42.  Then came names like Joey Muto, Aaron Paecht, and Wille Cosme.  And most recently Jamie Baker, Enes Braga, Colton Bailey, Andrew Capistran, Brian Franco, Sam Comfort, Phil Prue, and Zac Egnitz had success on the mat. 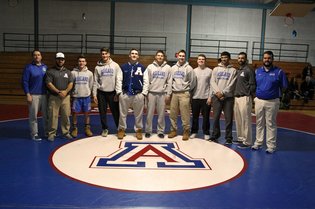 The 2013-2014 season was the first in which Ashland was the host school        of the co-op.  Co-head Coach Pete Zacchilli joined the staff and the                    program also added assistant coaches Jarod Corey and Zack Botelho.  Zac Egnitz played a huge role in rebuilding the the Ashland program.  As captain of the 2014 co-op team, Egnitz captured a Sectional title and set the leadership expectations for the years that followed.

The Class of 2017 were the group pegged to bring Ashland its first standalone program since 2003.  They did just that.  Not only did they build the foundation of the program, they dug the hole too.  Thrown into the wolves as freshmen in the varsity lineup, they held their own and battled through adversity.  By 2016-17 what began as a few was built into a team of 29 strong Clockers.  The group referred to as the "Founding Fathers of Ashland's Rebuild" included Michael Crupi. Jack Campion, Peter Treveloni, Larry Gillis, Nick Riordan, and Vincent Palumbo.

Jorge Hurtado and Brian Burns of Keefe Tech also played a vital role in co-op's success throughout this time, eventually leading to the split and Keefe Tech's first standalone team since 2003 as well.

In 2016-17 the ASHLAND CLOCKERS finished 2nd in the TVL, 3rd in the Section, and 8th in the State.  Their finish at states along with 56 points in the tournament, both mark the highest performance at that level since 1984.  Michael Crupi (4th), Larry Gillis (5th), and Nick Riordan (2nd) led the way.  Riordan also finished 3rd in All-States.